in-au-gu-rate verb [trans.] begin or introduce a system; mark the beginning or first public use of an organization or project

At this writing, the world of publishing is in a state of constant flux due to a seismic shift in the industry bedrock monopoly of printing and distribution. The resultant eBook tsunami has changed the "rules" forever, and what in the past has been considered nothing more than vanity is now inexorably gaining a legitimacy born of success. Legacy publishing's static defense of the embattled castle and its crumbling bulwarks will never defeat the active offense of indie authors who no longer look to the old guard for permission to express creative energy via the written word.

If those words seem a bit lofty and puffed up, they're intended to be. I mean, why not have some fun with a new approach to realizing the dream of pushing your writing beyond the boundaries of a computer hard drive or filing cabinet? No longer restricted by the narrow requirements of the agent-publisher gatekeepers, you have the unfettered opportunity to offer your work without having to satisfy someone else's definition of what the reading public wants.

What a unique concept: recognize and acknowledge what has been true for decades, that the industry decides not what is read, but only that which is offered to be read. The public, in the past, now, and in the future, hold the keys to a writer's success, as well they should.

At the creative end of the business, loneliness comes with the territory. Years of solitary toil can easily spin a cocoon around your writing desk and trap you there in perpetuity. But if you are to venture into the real world, especially the new one of indie publishing, it's essential to embrace a sense of community and networking and a commitment to the concept that as writers we are not in competition with each other, but partners in a common goal. The success, however that may be individually defined, of one writer's book in no way stands in the way of any others.

To that end, Austin Indie Writers is a collaborative effort for communicating, sharing, assisting, nurturing, and ultimately succeeding in our personal writing goals as defined and controlled by each of us alone.

I'm delighted to be a part of this group and look forward with anticipation to the year ahead as we build upon this foundation. 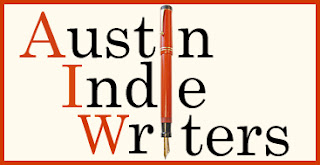 Posted by Tosh McIntosh at 4:26 PM